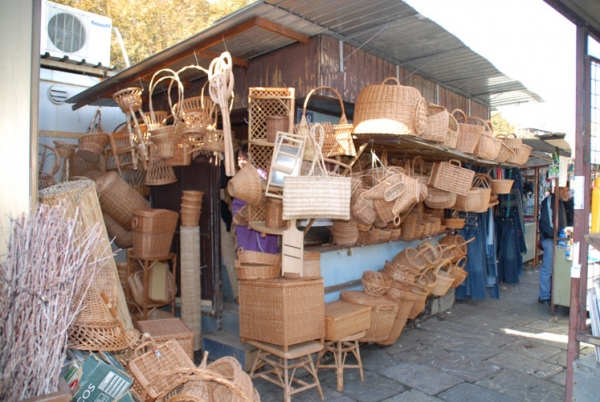 "Registration,compilationand indication of the various aspects of the basket -making ast of the minority groups of Roma
based on the Balkans"

The programme was realized in co-operation with the N.G.O UNIVERSALITY during the years of 2005 and 2006 and its purpose was the registration, the study and the forwarding of particulars of the cultural production (Basket-weaving, social contexts) of sensitive social groups, in particular those of the Roma countries of the Balkan Aimos Peninsula, such as GREECE, MOLDAVIA, ALBANIA, F.Y.R.O.M., SERBIA, BULGARIA and TURKEY. The research brought to the surface the deeper historic bonds existing between the Gipsy groups of the area, long before the mapping out of the national frontier lines of the South Eastern Balkans. It unified them by making known, not just the differences, but mainly the similarities among the Gipsy groups, as they are reflected in the forms, the shapes and the ways of basket-weaving in the Aimos Peninsula.
A point of reference and place of exhibition of all the forms of Basket-weaving, is the Roma Basket-weaving Museum in the city of Komotini, Greece, established in 1995 (the one and only of its kind in Europe).
Through this programme, was achieved the enrichment of the Knowledge about the Basket-weaving of the Gypsies, as well as their social and cultural characteristics.

View the embedded image gallery online at:
http://europeanstudies.org.gr/en/activities/item/166-thrace-komotini-special-programme-of-basket-weaving-for-the-roma#sigProId6d8ae6f42c
back to top